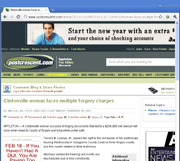 ← Australian Junior Rugby League loses $88,837 from forger… season must go on Celebrity Handwriting In the News →