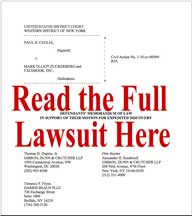 1. In addition to being impossible as a matter of historical fact, the purported contract is an obvious cut-and-paste job. This is apparent from the face of the document. Among other things, the column widths and margins are inconsistent, which indicates that the document has been altered and reproduced. Many words and sentences simply make no sense, and the document is riddled with internal inconsistencies and contradictions strongly indicative of fraud. Tellingly, there are many discrepancies between page 1 (which purports to convey an interest in “The Face Book”) and page 2 (the page with Ceglia’s and Zuckerberg’s signatures, and which makes no mention of “The Face Book” or anything similar). Ceglia appears to have taken page 2 of the signed StreetFax contract and appended it to a doctored version of page 1, which Ceglia has edited by adding references to “The Face Book.”

2. Defendants engaged digital forensic examiners to review all of Zuckerberg’s emails contained in the email account he used while a student at Harvard. That account contains emails from the 2003-2004 time period. The emails Ceglia quotes in his Amended Complaint do not exist in the account. They are complete fabrications.

3. Ceglia is a professional con artist. A comprehensive background investigation conducted by the nationally renowned investigative firm Kroll Associates, Inc. established that Ceglia is a career criminal who has engaged in fraud, subterfuge and falsification of documents. From his 1997 felony conviction through his 2009 arrest for scamming New Yorkers, Ceglia has a long record of criminal and fraudulent behavior that spans decades.