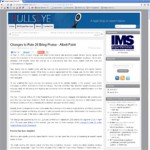 On Dec. 1, 2010, a major change took effect in the federal rule governing expert witness reports, giving draft reports the protection of the work-product doctrine and exempting them from mandatory disclosure. At the time, attorneys and experts hailed the change as a long-overdue step that would reduce both the cost and contentiousness of litigation.

“It has simplified the report process and removed some of the archaic hurdles in the process,” says David Donoghue, a partner at Holland & Knight in Chicago. “But I do not think it has simplified expert discovery overall because many are still testing and litigating the boundaries of the new rule, particularly what information is in fact discoverable.”

The change was approved by the U.S. Judicial Conference in September 2009 and by the Supreme Court in April 2010. To learn more history of the revision, you can read our first coverage of the changes to Rule 26 of the Federal Rules of Civil Procedure.

Practice Has Been Simplified
Attorneys and experts generally agree that the revised rule has made the process of preparing an expert’s report easier for them.
“It’s made dealing with experts easier and less time-consuming, because I worry less about avoiding creating discoverable documents,” says Ted Frank, founder of the Center for Class Action Fairness in Washington, D.C., and an adjunct fellow at the Manhattan Institute. “I haven’t yet dealt with discovery disputes over the issue.”

“It has simplified the process because neither I nor the expert has to worry about fighting over the discovery of drafts,” agrees Paul W. Reidl, an IP and business attorney in Modesto, Calif., “but so far I can’t say that it has reduced costs and contentiousness. In my experience, these kinds of issues did not arise that much in trademark cases because most experts are experienced enough to know how to work with counsel properly, and vice versa.”

But the Impact is Negligible
Despite high expectations that changes to Rule 26 would greatly reduce litigation expenses and ease attorney-expert communications, most attorneys claim the revisions have had little practical impact. Experts sound a similar note, saying the rule change has made the process of preparing reports simpler, but with little overall effect on the way they work.

One reason that the impact has been minimal is that, even before the rule change, parties often agreed to keep draft reports privileged. “For a number of years, the parties in most matters that I have testified in had reached an agreement that drafts were not discoverable,” says Alexander Glew, president and CEO at Glew Engineering Consulting in San Francisco. “Thus the immediate impact has been negligible.”

Even when they did not have a formal agreement regarding expert drafts, many attorneys seemed to agree, at least tacitly, not to exchange drafts. “Historically, not every opposing counsel asked for my draft reports anyway,” says Simon Z. Wu, managing director of forensic consulting at FTC Consulting, Washington, D.C. “In fact, in my experience, most of them didn’t because they wanted to avoid providing their experts’ draft reports to our side as well.”

Too Little Transparency
But not everyone is in favor of the new rule. Clifton T. Hutchinson, a litigation partner in the Dallas office of K&L Gates, says the new rule was “misguided” and allows counsel to take a more active role in drafting experts’ reports and crafting their opinions. “I think we need more, not less, transparency. Some of the important gatekeeping decisions of the past few years only came about because discovery revealed that counsel ‘spoon fed’ the opinions to the expert. … Now such practices will go undetected.”

Only more time will tell if the revisions to Rule 26 of the Federal Rules of Civil Procedure will have any long-lasting impact, positive or negative. At the moment, most attorneys and experts seem appreciative of the changes, even if the direct impact on their daily activities is negligible.

More New and Articles at http://www.ims-expertservices.com/blog/