Will Forger Gets One Year in Jail, Probation

When your girlfriend dies in a tragic mass murder the first thing you do is not to fake a will and take her entire estate, but that’s what Edgar Bloomfield of Santa Barbara County, California did. 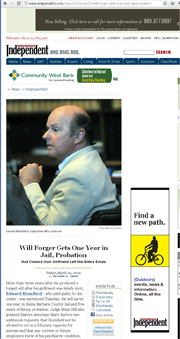 Bloomfield forges the will and takes the $750,000.00 his girlfriend had and named it to him which was a very bad did.  This is unusual in the fact that when it all played out he actually spent time in jail because they decided to prosecute him on the criminal courts so he had to face two courts, the probate court, which is where the handwriting expert was called in to look at the will and testament; this is where you come in and I found that probate courts are very fair which means when they get a handwriting expert they’ll let you have access to the will and you can microscope, and  bring your magnifying glass, you can take pictures of it and can actually touch and feel the original will and  makes a good decision on that because they really do want to get it right.

And in this case, they did get it right but you’ll also notice that if you read the full article Edward Bloomfield actually had two witnesses to the crime and they actually had to plead guilty for forgery, conspiracy and perjury, because his sister, Jeannie Bloomfield, and two acquaintances, Lena Star and Heidi Hodges signed as witnesses.

So he had four people lying under oath to steal this dead woman’s money and her family had already suffered a tragic loss in a mass murder.  I tell you, when there is a big estate involved, there are no doubts to the scummy actions of unscrupulous people and as a handery expert you’ll see it all. Enjoy this article.

More than three years after he produced a forged will after his girlfriend was fatally shot,Edward Blomfield – who pled guilty to the crime – was sentenced Tuesday. He will serve one year in Santa Barbara County Jail and five years of felony probation. Judge Brian Hill also granted District Attorney Mary Barron two additional requests: that Blomfield not be allowed to act in a fiduciary capacity for anyone and that any current or future employers know of his psychiatric condition.

Authorities claim Blomfield forged the will of Beverly Graham after she was shot and killed in her apartment by Jennifer San Marcojust before San Marco went on a shooting spree at the Goleta U.S.Postal Service distribution center in January 2006, killing six others and then herself. The forged will left Graham’s entire estate, estimated to be worth $750,000, to Blomfield.

Less than a month after Graham’s death, Blomfield produced the will, which Graham’s family immediately contested in probate court. As the result of a complicated civil suit, in which a forensic examiner determined the will was forged, Blomfield was ordered to pay $340,000 in restitution to the Graham family and indicted in criminal court for burglary, financial elder abuse, forgery, conspiracy, and two counts of perjury. Blomfield pled guilty to all charges.

His final sentencing was pending almost a year, in part because Blomfield underwent a competency test, a several months-long process during which psychiatrists reviewed his mental state and determined that he was competent to be sentenced. At the request of Blomfield’s defense attorney, Steve Balash, Judge Hill exonerated the $25,000 bail and reduced Blomfield’s restitution fines from $10,000 to $1,000. Barron said she recognized that the court had already made a decision on Blomfield’s sentence but stated, “It does not seem fair or just that he should be able to buy his way out.” Although Hill granted two of Barron’s requests, he denied a third, that Blomfield not be able to serve as caretaker for the elderly or disabled, noting that this was a financial crime.

County Jail, and the man could face up to 10 years in state prison if he violates any terms of his probation. Noting that because there was no indication Blomfield ever engaged in similar actions and had no prior criminal history, Hill said there was not a strong argument for a state prison sentence.

Blomfield’s sister, Jeanne Blomfield, as well as two acquaintances,Lenae Stahr and Heidi Hodges, signed as witnesses on the forged will and had previously pled guilty to will forgery, conspiracy, and perjury.